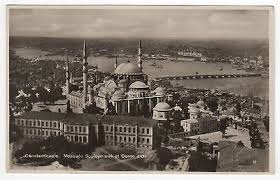 I sit here, in a room containing a single bed, dismayed by a cable from my former lover. “Best luck and wishes – Hans.”

Yesterday’s success is now behind me and I have been faced, today, with the harsh reality of what is firmly in the past and what lays ahead. I have no idea if Jason is in any condition to fly tomorrow. He has been dropped on his nose by the Turks at the aerodrome.

I awoke at 4am in Vienna. Sleep seemed less important than ensuring that Jason was ready to journey onwards. We were, the two of us, aiming for Constantinople today.

What a mistake I made leaving the overhaul of the engine to those Austrian mechanics. I should have kept my promise to Jack and taken matters into my own hands. It was clear, as I started Jason’s engine, that things were not how they should be. The rear spark plug was so completely oiled up it made me question whether the Austrian’s understood aircraft engineering at all. Before we could set off I had to clean that plug and check everything else over myself.

Yet that was only the start of today’s problems. Over the Black Sea, Jason developed a fuel pump leak and I was covered in petrol, the stench so nauseating that I had to lean over the side of him in order to pump more fuel in. I took another battering from those raging winds.

With an hour of daylight to spare, we landed at San Stefano Aerodrome, 30 miles from Constantinople. Europe was behind us now but any thought of celebrating our arrival was delayed by customs officials who were in no hurry to allow me to attend to Jason. When they were satisfied with my travel documentation no daylight remained, and not a single person here spoke English.

Light was provided by a driver who I motioned to direct his headlamps at Jason as I overhauled the engine. The local mechanics here are also lacking in the most basic skills. A simple refuelling resulted in my clothes being doused with overspilling fuel so badly that I fear I will smell of petrol forever.

Those embarrassed Turks pulled Jason into a hangar, where he remains. Then I came here, to this starkest of rooms, and saw this unwelcome cable from Hans.

I have never felt more alone.