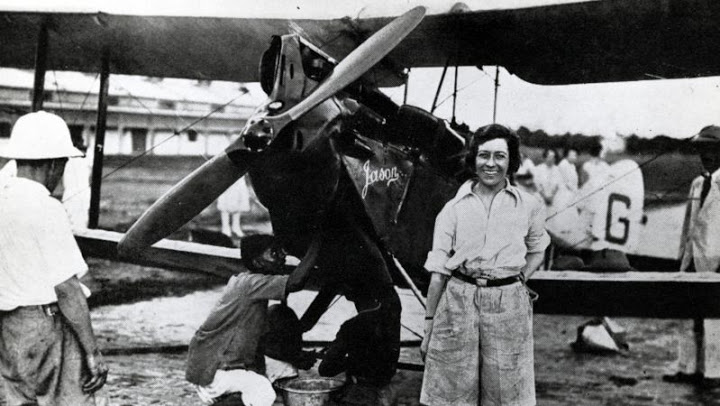 Short cuts are not always advisable, nor do they provide a shorter journey time. Thankfully, our guardian angels and God himself are by our side, ensuring that we stay safe.

Today I was lost over the Java Sea, having chosen to cross it as I reached the island of Bangka. While the weather had looked fine ahead it was not long before heavy rain and thick clouds forced me to fly as low as possible. This was more violent a place than I have ever encountered.

My mind flew itself to the stories of typhoons, hurricanes, water-spouts and such like horrors I had read about in my youth. I seem hemmed in by blackness, with black skies overhead, and black angry waves beneath whose salty foam I could almost feel on my face. Unable to go on, equally unable to turn back or to stay still, I circled round and round. I was more than terrified and shrieked aloud for help. I didn’t want to die that way – I knew that thousands of hungry sharks were waiting with mouths wide open – and my fingers closed over the knife I had in my pocket, for whatever protection that might provide.

As anyone would, I prayed for help. And as I did so, the sun returned and a perfect rainbow appeared in front of me. There it was, a sign from the Lord and one that I embraced. I headed for the opening that was now waiting for me.

With the darkness of night descending, I looked out to spot a safe landing place. A piece of open land, amid the rice fields and sugar plantations, was another gift from on high.

As we touched down, I feared that we might once more be heading for a ditch ahead but Jason miraculously slowed. It was, I was to discover, long bamboo stakes that had acted as a brake and prevented any further damage to Jason, although not before they had ripped the fabric covering his wings once again.

So here I am, in a bungalow on a sugar estate in Tjomal, in Java. The bungalow belongs to the manager here, who has informed me that a volcano erupted on Java today and the conditions in the air were so awful because of the shock waves. There are many dead and I am thankful I was not added to that count. We have fixed the wings with sticky plaster in the hope that I can take off tomorrow. For now, sleep, and no doubt more dreams of being lost at sea.