A MOTH FOR AMY

A Moth for Amy was a mass engagement public art project, modeled on Hull’s highly successful ‘Larkin with Toads’ scheme. Just like Geoffrey de Havilland, the Gipsy Moth’s manufacturer, we were fascinated by moths in all their many manifestations. Amy Johnson flew a De Havilland Gipsy Moth to Australia as well as several other de Havilland Moths during her flying career. A Moth for Amy was the centrepiece of our 2016 Amy Johnson Festival.

The master sculpture was created by East Riding Sculptor Saffron Waghorn and we invited artists and designers to submit their designs for the decoration of A Moth for Amy. We received almost 200 incredible submissions and, after much difficult deliberation, we managed to shortlist them down to 130. Our sponsors each selected their favourite to be realised on one of our giant fibreglass moths.

The breathtaking outcome was a public display of 59 unique artworks, each one reflecting the powerful inspiration of Amy Johnson and her amazing achievements. From 1 July 2016 the Moths remained where they settled until 31 March 2017, seeing in Hull’s year as UK City of Culture.

On 6 May 2017, 25 Moths were auctioned by Gilbert Baitson Auctioneers at the Royal Hotel in Hull. Together with the proceeds of the sale of the other 34 Moths to sponsors, over £80,000 was raised, half being donated to HEY SMILE Foundation to support local charities, and the reminder to fund our Amy Johnson Arts & Engineering Awards and future creative and educational programmes.

Where are they now?

Following the auction and the sale of Moths to sponsors, many were relocated around Hull and East Riding, some into private homes or businesses but many are still on public view. You can see where all the Amy Moths (and Larkin Toads) have landed in our new map ‘Where are they now’, downloadable here. The printed maps are available at Tourist Information Centres in Hull and East Yorkshire

There is also a handy phone-friendly Sculpture Finder with google map links to all the public Moths and Toads. 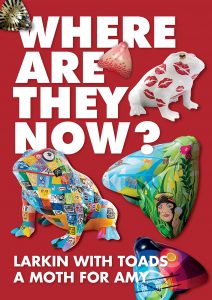